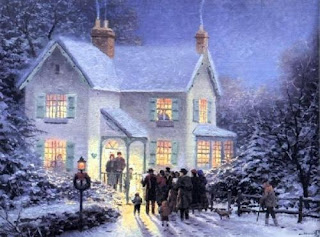 I am amused by the culture skirmishes that erupt each December over religious expressions in the public square. Thanks to an organization called StandforChristmas.com I can now know which retail businesses are most friendly, or most hostile, to my Christian faith, measured by whether their clerks greet customers with “Merry Christmas” or “Happy Holidays.” StandforChristmas.com informs me that it’s still legal to put up a crèche in a public park if the display conforms to the “Three Reindeer Rule.” This Rule requires a municipality to place a sufficient number of secular objects in close enough proximity to the crèche to render the overall display sufficiently secular.

I find this state of affairs tragically funny. The culture permits us to have our Merry Christmas as long as the Christ Child is wedged into in a group hug with Santa Claus, Rudolph the Red-Nosed Reindeer and Frosty the Snowman. Does the Creator of Heaven and Earth, who has called Himself Jealous, and who has zero tolerance for idols and pagan practices (read the Ten Commandments), wink at the sight of His Son reduced to a plastic manikin in a park flanked by fantasy figures? Christians should laugh at themselves if they think they are engaging the culture for Christ by maintaining the right to say "Merry Christmas" and to put up manger scenes.

Don’t get me wrong. I am not saying Christians should roll over and play 'possum in the cultural wrestling match of ideas and expressions. To the contrary. By every lawful, appropriate and charitable means we should stand up for our rights and for the preservation of our religious freedoms. But we should not be satisfied with merely engaging the culture and preserving our rights. We should be transforming the culture by seeding the Gospel of Peace throughout its core and substance. We should let the dazzling truth of salvation in Christ alone be on display in the Children of God, through a rejoicing Church. A caroling Church, if you will.

Let’s review the historic facts about our cause to sing. In the Christmas story we see the Lord God set the stage for His dramatic appearance on earth. He employs prophecies, signs and circumstances to reveal His divine redemptive plan for saving mankind from eternal damnation. An angel appears to a virgin and delivers a prophecy. A child is conceived by the Holy Spirit. A moving star hovers over the birthplace of the child, attracting wise men, bearing gifts, from the east. In Bethlehem the Ancient of Days becomes a baby. The God, upon whom no one can look and live, is cuddled by His mother and is nursed at her breast. The High King of heaven leaves His throne to lie helpless in a manger. The Immortal, Invisible grows up in a family, working hard to please his earthly parents and His Heavenly Father. The infinite Almighty walks the earth and grows with age until He is 33 years old. Then the Creator of life experiences death. The Perfect, Holy and Sinless One is executed, suffocating and bleeding on a cross for the crime of stating who He truly was, the Son of God.

The Christmas story is breathtaking. It is magnificent mercy. The magnitude of limitation that God ordained for Himself to come to us in human form is staggering to the mind and heart. Jesus came to die for us, to secure peace for us with God the Father. Yet He rose, and He lives, and He reigns. He is King of Kings and Lord of Lords!

I think this is something worth jumping up down and singing about. This is the kind of good news that displaces the gloomy darkness in the culture. Martin Lloyd Jones has said, “The greatest need of the hour is a revived and joyful Church...Unhappy Christians are, to say the least, a poor recommendation of the Christian faith.” I heartily agree. A church that effectively engages the culture should be a rejoicing church.

We must not think that the Gospel will be received with joy in all quarters, of course. In the same way that a flashlight sends cockroaches scurrying in the shed, the light of Christ sends wicked men ducking for cover. The Gospel is a blessed beacon of hope to the repentant, but it is a blinding beam of exposure to the recalcitrant. Men who love darkness rather than light will be repelled by it. I know this from experience. I was a mocker of Christians until Jesus, the light of men, broke through to reveal my spiritual blindness and to save me by grace. Soon my friends began to mock me as a Christian. This, too is amusing, ironic, yet glorious.

Sing on, I say. Carol the culture. Sing songs about Jesus being born in a manger. Sing words of hope and joy for a troubled world held captive by dark deceit. Let the light of the Gospel do its wonders among men, penetrating and purging cancerous sin wherever it festers. Let the rejoicing church be known for Who it loves more than for its disdain for darkness. Let Christ draw men unto Himself as He did with the wise men from the east, who came to worship Him. Let the rejoicing church be known for its Merry Christians, who are Light-hearted, filled with the illuminating love, joy and peace of Jesus.

Joy to the world, the Lord is come
Let earth receive her King
Let every heart prepare Him room
And heaven and nature sing