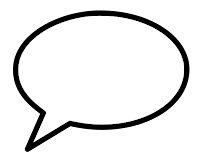 Last year I began writing a practical workbook for beginning speech students, hoping to finish smartly and in due time. But as I labored away, new ideas kept creeping in to make it a larger work. I considered speech for all of life.

Now I fear it may take all of my life to finish it. So I include an excerpt below, salving a sense of tardiness, and tossing out crumbs as from a piece of toast, so to speak. Here's to the speech driven life.

Imagine life without speech. There would be no words, no sentences, no greetings, and no good-byes. Life without speech would mean no stories, no songs, no sermons and no jokes. Bo – ring. Fortunately, the world is full of speech. It is a speech driven life.

I noticed right off that all five of my drooling and toothless offspring were hard wired to speak. As infants, they spoke in burbles and bubbles. They wailed their vowels before nap nap, and they sputtered out their consonants while slurping from their sippy cup. They grunted like daddy did when he tried to fix the plumbing under the sink. They shrieked like mommy did when she watched spaghetti sauce get splattered onto the off white carpet. In short order, too, our wee ones babbled out discernable utterances like “momma” and “dada.” “Good job,” I’d gush, “now can baby say ‘antidisestablishmentarianism’?”

The Science of Speech

Man has an amazing capacity for language. While other creatures on the planet might be able to communicate with various sounds and calls, only man can tell jokes and recite poetry. Right from the start, the first man, Adam, demonstrated his language skills when he named all the livestock, all the birds, and all the beasts of the field. He did this on his first day of existence. Talk about high aptitude. Then, a bit later, after God performed rib surgery on him to create a special-order bride (Eve), Adam woke up to wax eloquent. He crooned, “This at last is bone of my bones and flesh of my flesh; she shall be called Woman, because she was taken out of Man.” Busy day. (see Genesis 2:18-24)

The Bible states that God spoke all of creation into existence, and that man was made in God’s image. It’s no surprise, then, that man was given amazing language abilities. Man’s brain is designed with regions of special function that enable him to speak, write, read, compute, reason and be creative in all manner of ways. Man was made to live in community with his maker and with his fellow man. God therefore equipped him with an exquisite neurolinguistic processor.

Scientists have determined that a region of the brain called the perisylvian, located in the left hemisphere of the frontal lobe, is the chief command center for speech and language. It is in around this region that cognitive thinking, abstract reasoning, and language comprehension are believed to take place. The perisylvian area kicks into gear when you try to have a conversation with your dentist while his tools and fingers are in your mouth. It helps you deal with tricky figures of speech without losing sleep at night, thinking about ridiculous contradictions. Read the following oxymorons (incongruous words) to see if your perisylvian area is working.

God has equipped us with the marvelous ability to process and produce language. We should be eager to use it in ways that are pleasing to Him.

“Let the words of my mouth and the meditation of my heart be acceptable in your sight, O Lord, my rock and my redeemer” (Psalm 19:14).