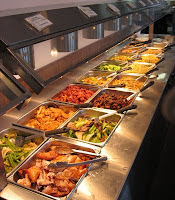 Personal spirituality is in. Biblical doctrine is out. Such is the case in America today as individualism continues to define the religious landscape in our “one nation under God.” A recent article in USA Today proclaims, “Religion today in the USA is a salad bar where people heap on upbeat beliefs they like and often leave the veggies — like strict doctrines — behind.” Americans now treat religion as a buffet line, from which they can pick and choose particular beliefs based on personal preferences.

According to recent surveys a whopping 92% of Americans say they believe in God, and 58% say they pray every day. Yet they appear to be uncertain about our their beliefs. Sixty-eight percent believe “there’s more than one true way to interpret the teachings of my religion.” Fifty-seven percent of Protestants believe there are “many ways to get to God.” Fifty percent say “homosexuality is a way of life that should be accepted by society.” Fifty-six percent think they should either ‘adjust to new circumstances” or “adopt modern beliefs and practices,“ into their religious beliefs. Relativism is clearly alive and well.

I’m not surprised. What else can we expect when multiculturalism and relativism is the preferred worldview promoted by the government schools and the media, which are major shapers of values and beliefs in America today. In contrast, the teachings of the Bible seem intolerant and exclusive. Folks today have little appetite for Jesus’ claim that “no one comes to the Father except through me” (John 14:6). Nor do they agree with Jesus when He said that “many are called, but few are chosen” (Matthew 22:14). Americans prefer a “Santa Claus in the Sky” god, who lets everybody into his heaven, instead of a righteous God, who casts sinners into hell.

What’s a pastor to do in times like these? Why preach about the depravity of man and the cross of Christ, when people want their ears tickled about self-esteem and life enhancement? Why offend listeners with the righteous requirements of God when you can tell the customers what they want to hear? It’s good for attendance. It’s good for the weekly offerings.

I praise God for such times. When the gospel of Christ is viewed as foolishness by the world, it is all the more glorious when its transformational power is set loose to redeem sinners. The gospel was never intended to be popular and sell well in the culture. Christ, the Cornerstone, is an offensive stumbling block (1 Peter 2:8). The words of the Apostle Paul to his disciple, Timothy, are a great encouragement to me:

“I charge you in the presence of God and of Christ Jesus, who is to judge the living and the dead, and by his appearing and his kingdom: preach the word; be ready in season and out of season; reprove, rebuke, and exhort, with complete patience and teaching. For the time is coming when people will not endure sound teaching, but having itching ears they will accumulate for themselves teachers to suit their own passions, and will turn away from listening to the truth and wander off into myths. As for you, always be sober-minded, endure suffering, do the work of an evangelist, fulfill your ministry” (2 Timothy 4:2-5).
Posted by Pastor John Sleadd at 11:17 AM